Before departing for my scholarship year, it amazed my how much my nervous and uncertain frame of mind differed from that of the fearless girl who left for Germany five years ago. I can attribute most of this to being less naïve these days, but I also think a lot of it had to do with know I wouldn’t be immediately received as a member of a family. Despite my initial fears, I’ve had the fortune of continuing to be surrounded by love and warmth — even when traveling to winter.

The house I live in a traditional French-style home built around 200 years ago. It’s owned by a American-Argentine couple who have relocated to America and now rent out the rooms. It’s certainly not as grand or well-kept as it once was, but it retains a unique character and offbeat elegance that make it a special place to live.

But the most important aspect is my housemates. They are a lovely group of warmhearted people, who are serious about their work and studying, but also outgoing and share an animated communal atmosphere. There’s Ruth, a bubbly sweetheart from Spain studying electrical engineering; Arturo, from Venezuela, who’s lived here two years already and makes a great surrogate older brother; Lauren, an American expat who decided to stay after studying here on a Fulbright Scholarship and is married to Miguel, a Chilean with whom I gave great discussions about literature; Travis, who works for an Australian oil company that sends him to work in various areas around the world; and Claudio, the house’s quietest member but a total sweetheart, here from Chile, very appreciative of his opportunity to be studying at a university, which is inspiring.

The barrio (neighborhood) I live in is Caballito. The inhabits consist of a mixture of old-monied porteños* who have retained their large, french-style houses similar to mine; bohemian students attending the University of Buenos Aires’ Department of Philosophy and Literature; and middle-class families who can’t afford or don’t want to live in the “hip” barrio of Palermo or “chic” barrios of Recoleta or Belgrano. Plus, there is a Portuguese Club — haven’t been there or met any Portuguese transplants yet, but I just might be living in the Central Valley of Buenos Aires!**

Our building (it’s actually up for sale and must be bought by an American, if anyone’s interested)

My room, just to the left of the entrance

Most important part of my workspace

What you see if you pull back the curtain 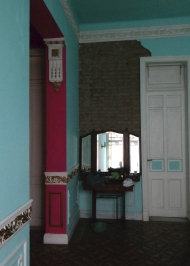 I adore the vibrant colors

Looking into the bathroom, through the doors in the background is a small balcony 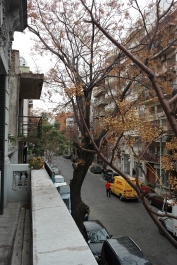 View from the bathroom balcony

Heading out to the terrace area 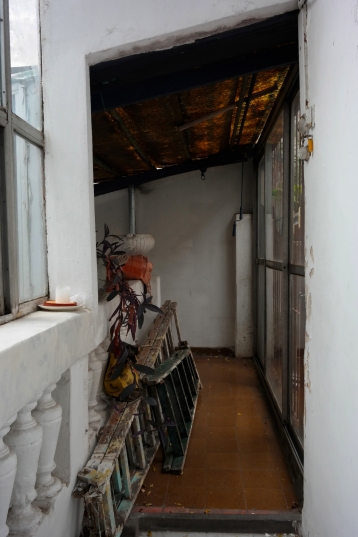 To the left for the laundry room, right for the terrace 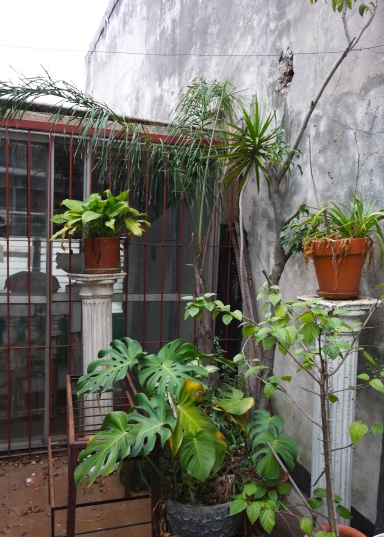 Stuff is a bit disorganized as they’re renovating the terrace 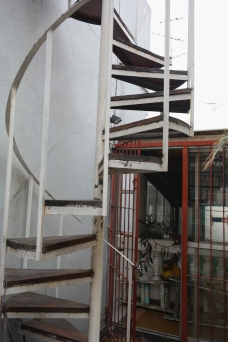 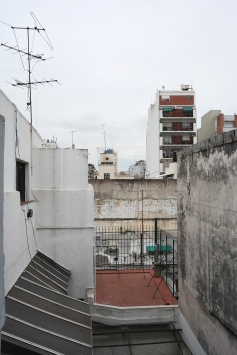 View as you ascend

Upper terrace, couldn’t get pictures of the view due to aforementioned renovations

back down to kitchen 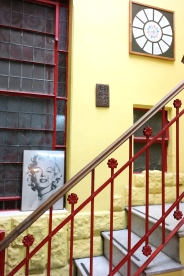 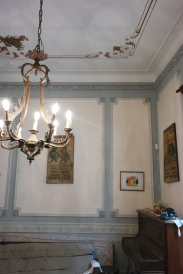 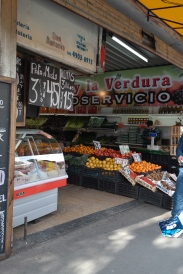 ….really anything you could need

Argentine really do love parilla (BBQ). These people are set up every day and it’s really hard to resist buying something every time I walk buy. 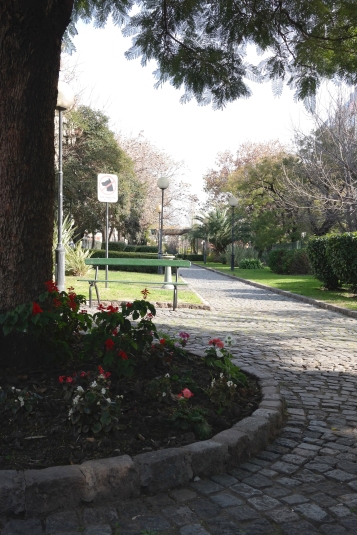 Park on the block next to mine

*Word for someone from Buenos Aires. You might want to remember this one, it’ll probably come up a lot!

**If you want to do further reading the neighborhood, I would suggest this blog post, which provides a more accurate depiction that Wikipedia. Also, here is a low-quality video someone made.